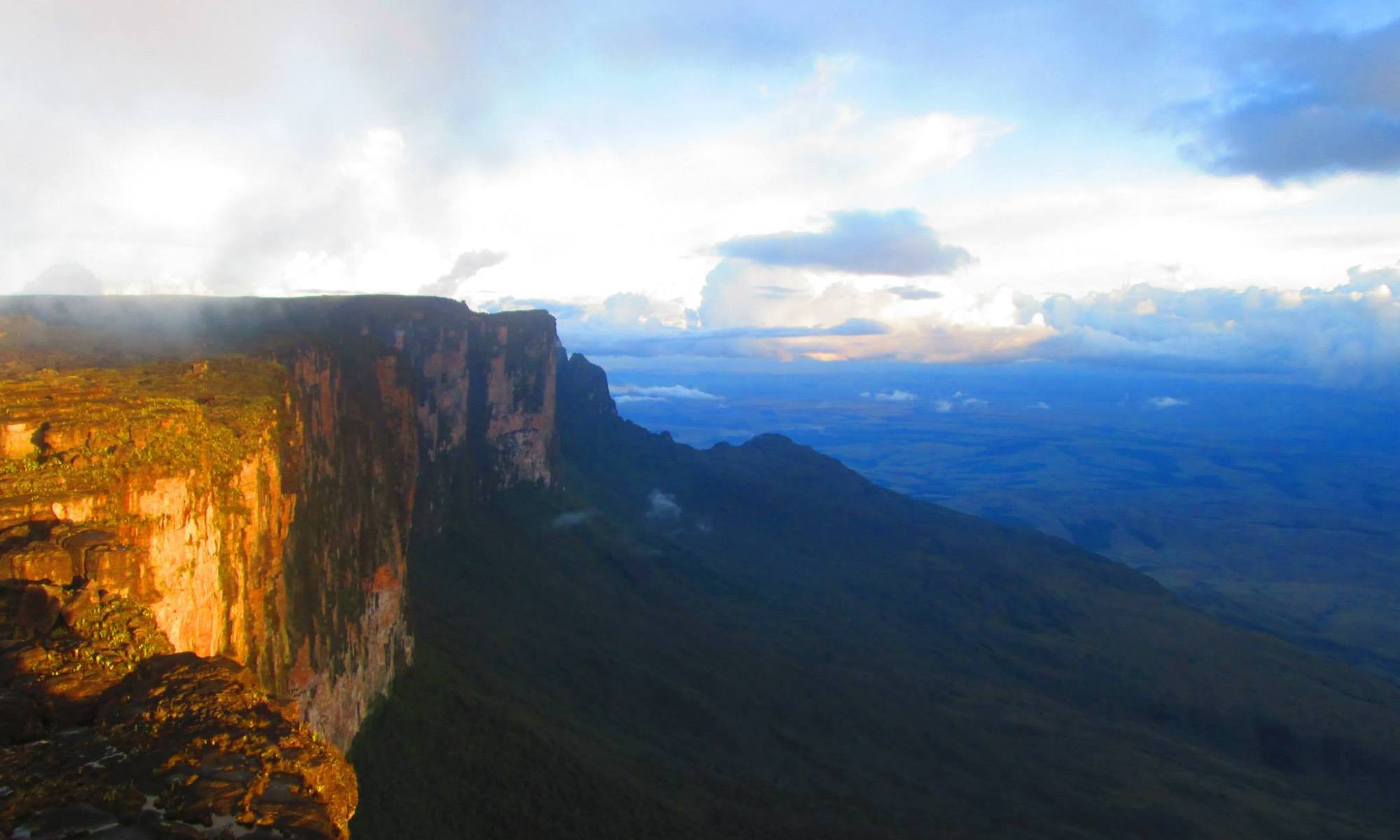 In a peaceful corner of Venezuela lies a range of sleeping giants, known as tepuis. Roraima is the most impressive, and one of the more accessible of the tepuis. Its lunar-like plateau spans the Guyanese and Brazilian borders, and lends to breathtaking views of which photos cannot quite do justice.

The journey begins in Santa Elena de Uairén, and takes you far away from civilization on four wheels, before delivering you to the start of the trek. You will be accompanied the entire way by a small group of guides whose expertise is undisputed. They will facilitate the trek by carrying the majority of necessities, and set up the tents and cook the meals too. You are advised to pack lightly and sensibly, and to consider the weather. There are noted wet and dry seasons, but even in the dry season getting wet is a distinct possibility.

The ascent is manageable for anyone in reasonably good shape. It is not technical but requires (as ever) a steady foot and a suitable frame of mind.

As you wander through the luscious expanse, the formidable peak ahead looms large, increasing in size ever so slightly as you get closer. Clouds roll over and bring occasional showers that in season can turn the path into a stream. You’re expected to get wet at some point on the trek, whether in a downpour or when scrambling up a waterfall (really) on the final stretch of the ascent. There’s also a fast-running river that can only be waded through.

Reaching base camp takes roughly two days at a reasonable pace, and camp facilities – though threadbare – exist along the way. On day three you will ascend from base camp to the top of the fabled tepui through jungle on the near-sheer face of the mountain. You will spend day four on the plateau, taking in its spectacular sights, and make the descent the following two days, returning to Santa Elena de Uairén on the evening of day six.

In Pemon legend, Roraima represents the stump of a tree that once bore fruit to all nature surrounding it. It is still revered spiritually and contributes to a mystical aura that can be felt when there.

In Western culture, it is the inspiration for Sir Arthur Conan Doyle’s 1912 novel The Lost World, in which dinosaurs and other extinct species were found existing peacefully. Art drew further inspiration from the mountain in Disney Pixar’s film Up, which in its unique way tells a charming story through implausible adventure and touches on many characteristics of the tepuis.

You will encounter mainly Venezuelan natives in the area surrounding Roraima, typically mestizo in their genetic make-up. The guides to the magnificent mountain however are from the Pemon tribe. Their local knowledge is outstanding, contributing a truly authentic feel to the experience. The lengths they will go to ensure a comfortable trip is a humbling experience, and due to the continued time spent with the guides, camaraderie is not difficult to build. Mount Roraima has spiritual significance for the Pemon people and accordingly respect must be shown towards them and their customs.

The Roraima Black Frog, a diurnal amphibian no larger than a walnut, is one of Roraima’s indigenous species. As the tepuis have for so long been isolated from surrounding nature, the wildlife found in these environments illustrate an organic process of evolution. Of its 10,000 different plant species, half are unique to the area. One of such plants the marsh pitcher plant, the first discovered and best known of all pitcher plants.

Thanks to its flora and fauna, the landscape at the summit is unusual and lunar-like, and when the fog rolls in it amplifies the extraterrestrial sensation.

It sounds like a 90s US teen drama, but the creek that lies 25km away from Roraima is a wonder to behold. Its floor bed is dashed with red jasper resulting in an iridescent glimmer of crimson red. The setting is otherworldly and peaceful, and is an example of the awe-inspiring features of southeastern Venezuela.

Springs on the plateau are a cleansing experience. The water ranges from freezing to warm depending on the time of day and year, and the completely clear water is as fresh as it gets.

On the surface you will notice clusters of shimmering quartz crystals that have developed over thousands of years, assisted by the lack of human interaction. As with all nature, its beauty is best left unspoiled and there are regulations forbidding the removal of the crystals on pain of a rather hefty fine. On top of that, the local guides’ licenses depend on their authority dissuading you from chancing it. For many of the pemon, this is their only source of income, so removing the crystals can have potentially disastrous consequences.

This is a text widget. The Text Widget allows you to add text or HTML to your sidebar. You can use a text widget to display text, links, images, HTML, or a combination of these. Edit them in the Widget section of the Customizer.